ECOSYSTEM ECOLOGY FROM THE AMAZON TO THE ARCTIC

Within the collaboration, our group has focused on measuring ecosystem-scale photosynthesis and respiration by eddy covariance. It is now over 20 years since the first long-term eddy covariance measurements of net ecosystem-atmosphere carbon exchange began, and such measurements have become a matter of routine at over 500 eddy covariance tower sites around the world (the first site was the Harvard Forest). However, it is not enough to know the net exchange. The net exchange is the balance of two somewhat independent and somewhat coupled components: ecosystem-scale photosynthesis and respiration. In order to understand or predict NEE, one must understand these two components. Unfortunately, there has been no means to measure photosynthesis or daytime respiration directly at the ecosystem scale; instead, people have made guesses by  partitioning NEE measurements according to prescribed behaviors for photosynthesis and/or daytime respiration. What is desired instead is a method to discover those behaviors, and so to test whether the prescriptions of the last 20 years have been correct. Ecosystem-atmosphere carbon exchange is key both to the ecosystems and to the atmosphere. On the one hand, the atmosphere is the carbon source for the construction of plant biomass, and on the other, ecosystems influence atmospheric carbon dioxide (CO2) levels and thereby climate. Ecosystem models differ widely in their depictions of how forest carbon dynamics will interact with a changing climate, and that interaction is a large source of uncertainty in climate predictions. Accordingly, we have been investigating the mechanisms controlling carbon exchange at the Harvard Forest by integrating stable carbon isotope analyses with a suite of measurement approaches including eddy covariance, soil chambers, plot trenching, and minirhizotrons. The data are being integrated in and used to refine an ecosystem model called Ecosystem Demography 2 (ED2). This work is in collaboration with Boston University, Harvard University, and the Woods Hole Research Center. 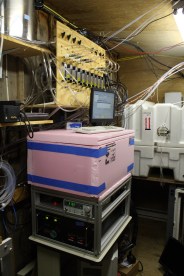 EnAerodyne Quantum Cascade Laser Spectrometer for measuring   12CO2, 13CO2, and 18O12C16O in air, working away in the shack at the base of the eddy flux tower. Photo credit: Rick Wehr.

Isotopic flux partitioning (IFP) is such a method. It works by identifying the photosynthetic and respiratory components of NEE by their distinct stable isotopic signatures. The ratio of 13C to 12C differs between photosynthesized and respired carbon because there is a strong isotopic fractionation by photosynthesis that varies on timescales shorter than the mean age of the substrate for respiration. We have been using IFP at the Harvard Forest as an important part of our study of carbon exchange. Among other things, we have found that ecosystem respiration is especially sensitive to soil water content during the day, and that photosynthesis becomes more efficient through the summer, contrary to expectations. These results elucidate the controls on forest ecosystem productivity and carbon sequestration, with consequences for predicting the evolution of the coupled biosphere-climate system
.